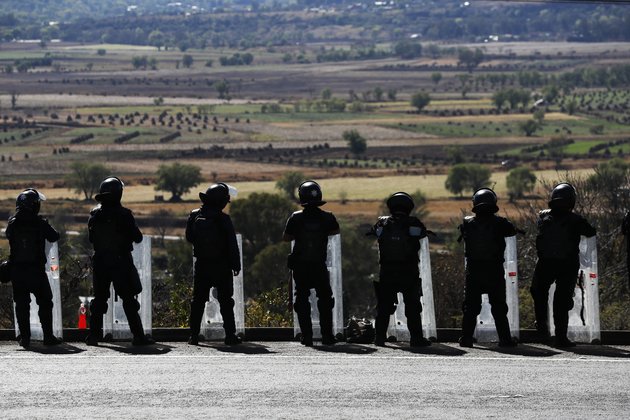 MEXICO CITY - Mexico extradited the son of the leader of the Jalisco New Generation Cartel to face drug charges in the United States, leading to fears his powerful gang may retaliate.

The U.S. Department of Justice said Oseguera will appear in a federal court in Washington Friday to answer a drug-distribution indictment.

Oseguera is known as "El Menchito," after his father, Nemesio Oseguera, alias "El Mencho." The younger Oseguera was born in California and holds dual U.S.-Mexican citizenship. He was arrested in 2015 on weapons possession and organized crime charges, and had been fighting extradition.

The Jalisco cartel is currently Mexico's most violent and fastest-growing gang.

The move appeared to spark fears of retaliation.

The U.S. Embassy issued a security alert saying "following previous high-profile security operations, criminal groups operating in Jalisco have responded by taking retaliatory actions including an increase in anti-government rhetoric (banners and internet threats) and blockades inside the city and on interstate highways."

"On some occasions, these criminals have seized private vehicles and set them on fire," according to the alert.

Durazo said Mexico had tried to extradite Oseguera before but "in fact, the process was a long one because of several legal appeals" filed by his lawyers, the last of which was rejected Wednesday.

Victor Francisco Beltran, Oseguera's Mexican lawyer, denied he was the son of Nemesio Osegura, suggesting he was instead a nephew.

Beltran said the extradition shouldn't have happened, because the younger Oseguera still had pending appeals.

The elder Oseguera remains a fugitive, despite the 2018 arrest of his wife.

The U.S. has offered a $10 million reward for information leading to the arrest of the elder Oseguera.

Jalisco New Generation has a reputation for battling with government agents. It brazenly shot down a Mexican military helicopter with a rocket launcher in 2015, prompting Mexican officials to declare an all-out offensive against the criminal group.